Andullo is an old Dominican version of a sailor's perique carotte. Dominican tobacco varieties are hung to yellow and wilt for about two weeks, then frog-legged, laid-out and rolled into a tight cylinder, wrapped in canvas, then snugly wound with rope.

The carotte is unwound after about a month, then re-wound more tightly. This is repeated, like airing of perique, at monthly intervals over a period of at least 3 months. The product of this process is a solid plug of very dark or black tobacco that can then be shaved or sliced for use in a pipe, cigarettes or even in cigar filler. 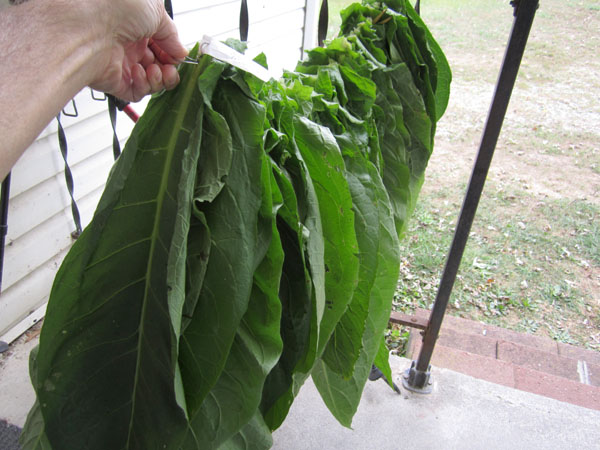 I decided to try this using reasonably intact, relatively mature sucker leaf from Olor and Piloto Cubano. I was able to harvest 48 leaves of Olor, but only 10 leaves of Piloto Cubano.

For my canvas, I cut the leg off an ancient pair of tan Dockers that had already spent some time in my scrap fabrics pile. The resulting piece is about 27" long. 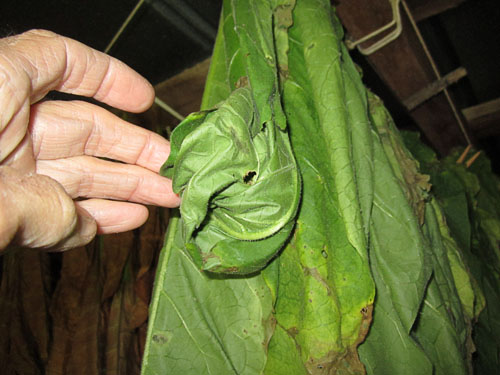 At the end of two weeks in the shed, the leaf was well wilted, though not very yellowed.

I frog-legged the leaf. The pile of stems that were removed represent a fair amount of water that will not have to dry from within the plug. 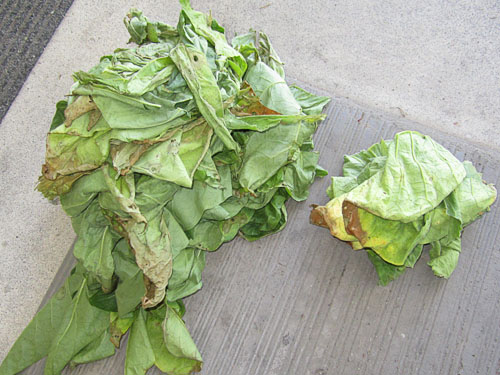 That left me with a pile of frog-legged, wilted leaves. 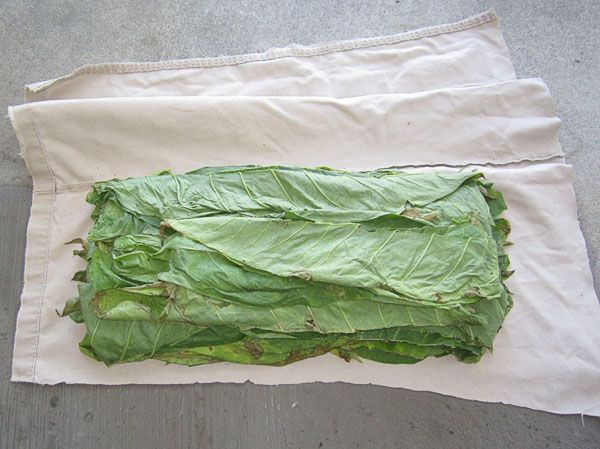 These were laid out in layers onto the canvas, starting with a layer consisting of all the Piloto Cubano, so that it would end up surrounding the Olor in the finished plug. 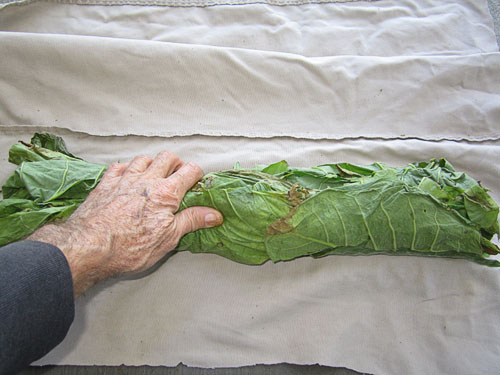 The leaf pile was then firmly rolled, without the canvas.

I now wrapped the canvas tightly around the cylinder of leaf, and tied each end with string.

By attaching an 1/8" braided nylon rope (actually 3 ropes tied in series) to a clothesline pole, I was able to apply maximum traction to the rope as I wound it about the carotte. This required a little over 100 feet of rope.

The completed carotte was tagged, then hung in my enclosed back porch. I should know in a month, when it is unwrapped the first time, whether or not the leaf molded in the center. If not, then I will continue the process through the winter.

Good idea to try to make a perique carotte with suckers from cigar strains.
I will follow your project with great interest !

Here's a somewhat romantic article on the preparation of andullo for Aurora Cigars:

Andullo, a method that impart strength and flavor to tobacco

Andullo, a tobacco process inherited from the Dominican ancestors, has lasted over time for the excellent characteristics obtained by tobacco: great strength and aroma.

How do they work that into a cigar? Grind it into fairy dust and sprinkle it over some whole leaf?

I have no idea. I'll see what I end up with. If it works at all, I'm expecting pressed plug.

Had to try it. It was an above average smoke, good quality, like one would expect of Aurora, with a few hints of something different. It didn't seem strong but it kinda hit me at the end.

ChinaVoodoo said:
...it kinda hit me at the end.
Click to expand...

Is that an Alberta euphemism for "It kicked my butt?"

deluxestogie said:
Is that an Alberta euphemism for "It kicked my butt?"

Right drained, for sure. Couldn't leave the Chesterfield.
T

Lane Limited also makes a pipe tobacco blend called Andullo, which contains black cavendish, andullo, and latakia, all topped with a lightly sweet casing (I think vanilla or some such).

I had two plants blow over when the first cold front roared through two weeks ago. I had already harvested the leaf I wanted for wrappers and was just letting them regrow for their flowers. On a whim I hung them whole in the garage thinking I might do something with them. Today I decided to give this a try so I harvested and frog legged some leaf from all levels of the plants and sacrificed an old T-shirt for the cause. I made 3 layers of leaf trying to get an even distribution of seco, viso, and ligero and misted rum between each layer. Conscripted my younger son to help me roll the carotte. Bob made it look easy above, but let me tell you, applying enough pressure to compress the leaf and simultaneously roll the bundle quickly burned out my feeble wimpy desk-jockey-mouse-pushing forearm muscles! The burn!!!! The carotte is a mix of Comstock Spanish and Glessner. The entire carotte was misted with rum when finished and hung in my hot-water heater closet for curing. Now we wait and see what happens.

The bunch ready for rolling.

I did forget to mention about the muscle work. My upper torso and arms are way stronger than my old legs. Since I was winding my andullo outdoors, I ended up literally crawling along the grass on my knees, after it was about half wound. I snapped a quick photo while I could still lift my tiny camera with one hand. Wind it a bit, crawl a bit, wind it some more. My forearms required three days or so to recover.

Maybe it was obvious to others, but I just had a realization about the south American rope tobaccos.

So, in this method, the rewrapping is essential because the tobacco shrinks as it loses moisture. So why not with the rope method? I think it's because they make those initial ropes, then progressively unspool them and combine them until they get larger spools.

I thought it was just about saving space, but now I realize the tightening effect is also important.

Never had one of those. Is there a noticeable or unique taste of the included andullo?

Ha! Will get you some pictures soon of a proper DR andullo. I regularly visit someone who buys this and uses it in his cigars. Any questions I need to ask him about?

GreenDragon said:
Never had one of those. Is there a noticeable or unique taste of the included andullo?
Click to expand...

I didn't notice anything obvious other than the nicotine being high.

It's been a month since I compressed the andullo in rope. Time to inspect and re-wrap. 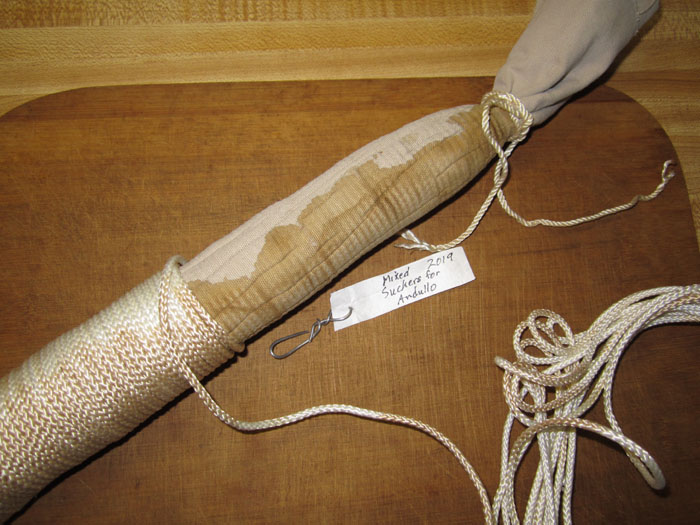 This end which shows some dry canvas, was the upper end, while suspended. So moisture moved downhill. The darker staining of the canvas doesn't really feel wet, or even damp.

The dependent end (lower end) is much darker. The leaf itself feels moist. Its aroma is not foul, but this appears similar to barn rot, which is caused by common soil organisms on newly harvested leaf that has been housed wet. There is a smudge of light-colored mold.

The next photo is a close-up of the lower end. 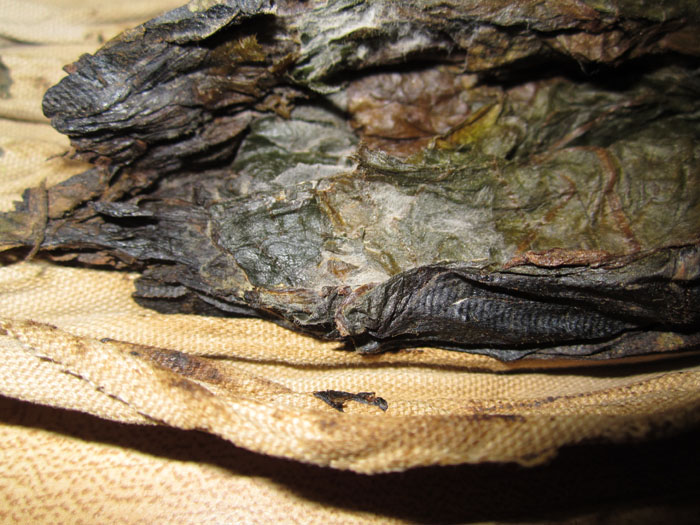 The upper end has clearly dried in a patchy fashion, even though the coiled rope would apply pressure equally throughout. The white box indicates the general area that I dissected for the subsequent photo. 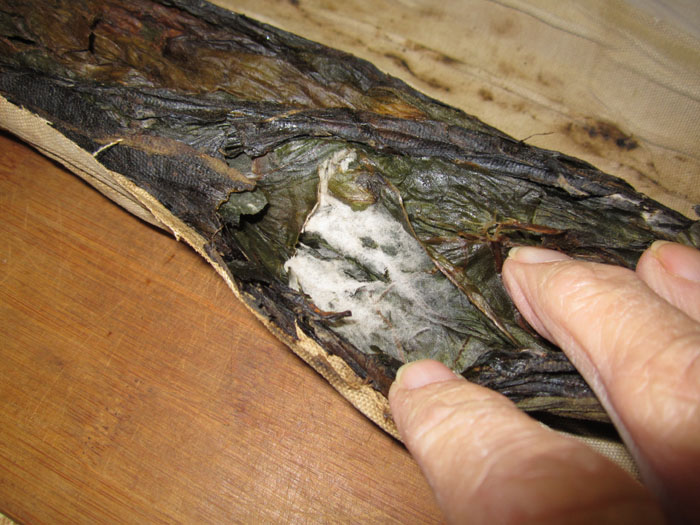 Perhaps this needed much warmer weather, even though the moisture squeezed to the exterior seemed to evaporate easily.

That's the end of my andollo journey. I saved the rope, and tossed the tobacco over the fence.

Sad this experiment went moldy
I think it needeed more pressure.
Maybe by removing the rope after a few days and re-rolling it. And doing it again and again more regularly...

For my poor knowledge I can confirm wath Charly write. It's 3 years that I made the same sort of "carotte" with suckers and late leafs and the trick is to roll as thight as one can (I made little diameters carotte and so the pressure is bigger) and after a few days unroll and tight again. So all the air is squeez out and ..... "No air? No mold!" After two or three cycles ther is no need to unroll again as the carotte is hard as a rock.